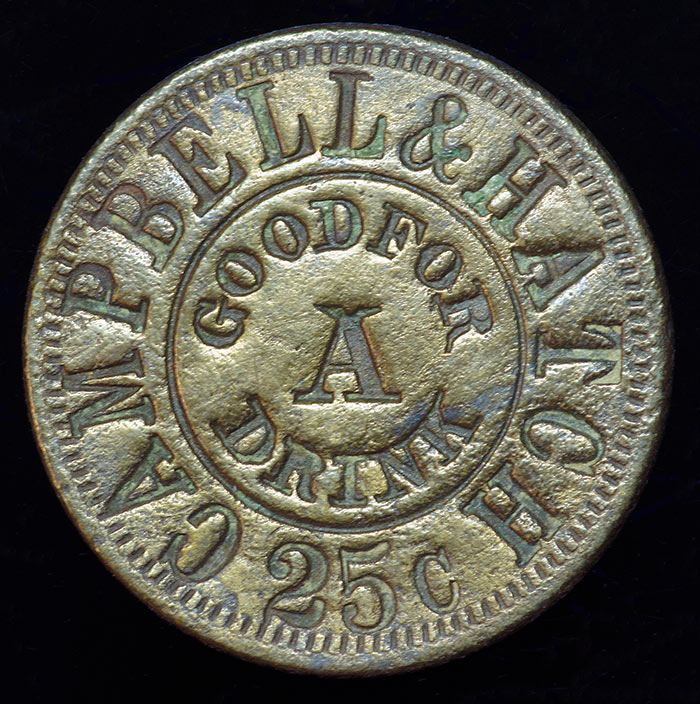 Peter Spooner, the author of “Arizona Trade Tokens – 2010” graciously allowed me to visit him in his Tucson shop in order to photograph a portion of his extensive collection of Arizona tokens. One notable, and particularly historic piece was this uniface token of the Campbell & Hatch Saloon in Tombstone AZ. Subsequent to the famous ‘Gunfight at O.K. Corral’ a series of events transpired that saw the shooting of several people that were involved in the O.K. Corral incident (October 26, 1881). One was the killing of Morgan Earp, brother of Wyatt, on March 18, 1882 while he was playing pool at the Campbell and Hatch Saloon and Billiard Parlor. This particular token has a couple of unusual features that set it apart from other Wild West tokens. As mentioned, this token is uniface, it has an incuse stamping, and while most saloon drink tokens are denominated as 12 ½ ¢ for one drink, this token has GOOD FOR A DRINK followed by 25¢. You can see a large series of other tokens from Tombstone Arizona by visiting the post for this token at the Moneta Museum. The token is listed in Spooner as TOM-105 and the rarity is listed as R9 with only about 3 – 6 known. A similar token sold recently for over $8500. The link above will lead to others detailing the sale and historical details of the ‘Gunfight at O.K. Corral.’