The collecting of international numismatic items (coins, currency and exonumia) can be a fun and interesting hobby.  Anyone with a desire to learn of the history of civilizations and countries can learn what was considered to be so important that their money proudly displayed it.  Others wish to learn or teach finer details of unique coins.  Education and the sharing of knowledge is a primary focus of NI, with the scholarly NI Bulletin, the library and the publications.  In addition, the semi-annual Bid Sale allows members to acquire items of interest or to sell excess numismatic items.  This is done in a spirit of friendship with members who have similar interests.

For a summary of Numismatics International and member benefits, please download the NI Brochure

NI provides a major service to its members:  the NI Mail Bid Sale.  This allows members to sell items which they no longer wish to keep.  The next Mail Bid Sale is a major milestone, Number 100, and it will take place in the Spring of 2021.  We want this to be a very special Mail Bid Sale.  Please consider to send us 30 or more lots of nice individual coins or sets.  We do want nice coins, so coins with a catalog value of less than $5.00 cannot be accepted.

Details for listing coins on the Mail Bid Sale can be seen on this website by members.  In order to prepare for this Mail Bid Sale, coins must be received no later than November 30, 2020. 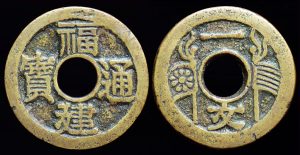 The Wuchang Uprising (aka Wuhan uprising) led to the Xinhai Revolution (辛亥革命) in which revolutionary forces overthrew the Qing Dynasty, ending more than 2,000 years of dynastic rule in China and ushering in the Republican Era (1911 to 1949). The revolutionaries were upset over government corruption, the encroachment of foreign countries into China, and resentment over Manchu rule over Han Chinese. The Xinhai Revolution ended with Emperor Puyi being ousted from the Forbidden City in 1912. The Xinhai Revolution led to the establishment of the Republic of China (ROC) in January 1912.
Double Ten Day (雙十節) is celebrated yearly on October 10. Double Ten Day is the anniversary of the Wuchang Uprising (武昌起義), a revolt that led to a declaration of independence from the central government by Wuchang and several other provinces in China in 1911. [ThoughtCo.]
Not only is this coin representative of the end of 2,000 years of dynastic rule, coincidentally this series of 3 types of 1 & 2 Cash coins, spells the end of cast coinage for China going back at least 2,600 years. This scarce series of cast coins were made for the Wuchang Uprising. They do not show a date, but were cast in late 1911 and/or early 1912. Shown here is the 1 Cash coin that shows 6 stripes for the 'Five Colored Flag'; the two types of 2 Cash coins vary in showing 5 or 6 stripes. Later in 1912 struck coins were issued celebrating the successful uprising that changed the face of China. You can see examples of the other Wuchang Uprising coins at this LINK.

If you are not an Numismatics International member, and you wish to view a sample of the NI Bulletin, please visit the "NI Bulletin Sample" on this website.