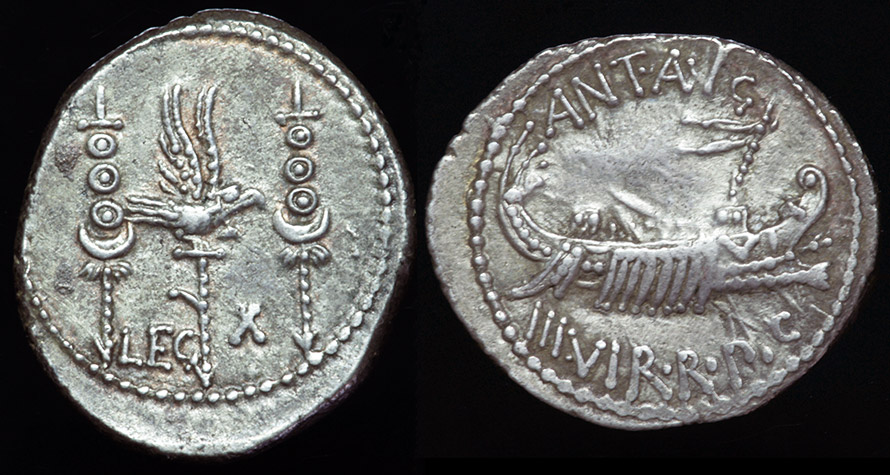 If you are a collector of Roman era coins then you will recognize this denarius as one struck by Marcus Antonius, known as a “Legionary denarii.” Mark Antony, engaged in a famous struggle with Octavian (later known as Augustus), was forced to battle at Actium on the west coast of Greece along with his ally Cleopatra VII, the Queen of Egypt . Mark Antony, using a traveling mint and less than standard silver, struck large quantities of these type of coins for 23 different legions and two specialized cohort units. He used these denarii to pay his legions and navy. Each of these legions were identified by their legionary number and the cohorts had unique designs and legends. One Legion stands out among all the rest, and has also been involved in a historians’ dispute for over 100 years. This exceptional example is as issue for the Legion X Fretensis. The controversy centers on whether or not this Legion is properly identified as Gemina or Fretenis. Professor Theodor Mommsen, when writing on his history of Rome, named Julius Caesar’s most trusted and brave Legion X as Gemina (Twins). Recent scholarship now indicates this was an error and the proper name should be Fretensis. As you can imagine, this kind of historical ‘knowledge’ can be difficult to correct since it has been referenced as fact in historical writing ever since. Such was the case when I obtained this coin, it was still being described as Legion X Gemina. It’s an important fact to correct. Julius Caesar himself raised the Tenth in southern Spain in 61 B.C. Legion X Fretensis was written about by Caesar in his Gallic Wars as the one he trusted most for their bravery and loyalty. There is no other legion that can be said to have participated in more spectacular historical events than Legion X Fretensis. They were with Caesar in Gaul and later at the Battle of Pharsalus, where Caesar defeated the forces of Pompey to become the undisputed dictator of Rome. They were at the Battle of Actium where Octavian defeated the legions of Mark Antony and Cleopatra, which lead to the creation of the Roman Empire and Egypt becoming a province of Rome. Thereafter, it was ordered to Syria and Judea and participated in the horrific suppression of the First Jewish Revolt (66 – 70 A.D), the last resistance at Machaerus and Masada (71 – 73 A.D.) and the Second Jewish Revolt (132 – 135 A.D). Attribution: LEG – X, Aquila (Eagle) between two standards; ANT AVG – III·VIR·R·P·C, Praetorian Galley r., with sceptre tied with fillet on prow. Babelon Antonia 117. C 38. Sydenham 1228. Sear Imperators 361. Crawford 544/24. Sharp EF and exceptional detail and preservation.