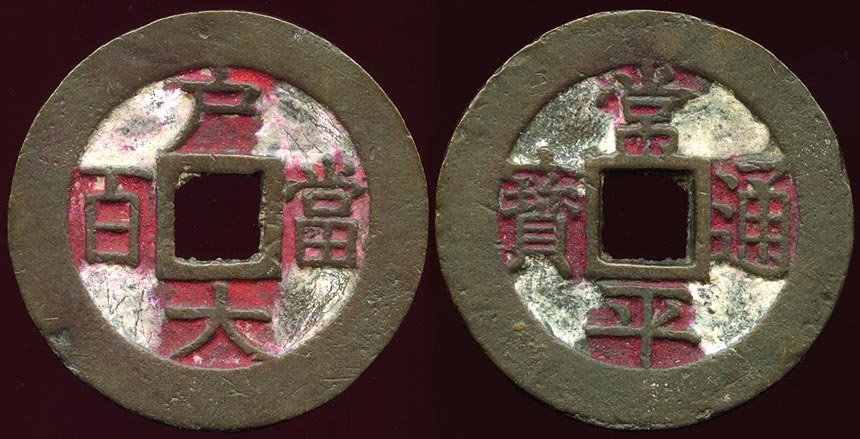 This is a One Hundred Mun (“Value Hundred” tangbaekchon or dangbaekjun [sang pyong tong bo] coin issued by the Kingdom of Korea and the Treasury Department (Ho Jo). The One Hundred Mun is the only denomination of sang pyong tong bo coinage for which accurate mint records exist. These coins were first cast by the Treasury Department on December 12, 1866 and put into circulation beginning January 15, 1867. The last coin was produced on June 16, 1867 which means these coins were cast for only 172 days. A total of 1,784,038 “One Hundred Mun” coins were cast by the government. In general the One Hundred Mun coins minted by the government have a diameter of 40.6 mm, a thickness of 2.8 mm and a weight of 25.1 grams. There are about 50 varieties of the 100 Mun coins with differences so slight (character stroke style, size, etc) it is hard for a Westerner to discern. Adding to the confusion is the fact that they were very profitable to counterfeit in those times. Only the fact that these inflated issues were very unpopular limited the fakes. They were used for other uses other than money. Like this one they were used as charms and as part of chatelaines. Others were carved, engraved and formed into various other shaped charms, which is another numismatic avenue unto itself. I’ve seen them embedded into oak chests, particularly money chests. The Koreans used a small hand grinder to pulverise beans and grain, so you often find poor examples of these coins with the center hole worn and the edges worn down because they were stacked as washers to separate the grinding surfaces at a desired spacing. A standard catalog of Korean coins shows more than 40 varieties, but even to this day they are illustrated with rubbings. Other than nice original examples you can seek out rare specimens of ‘mother coins’ that were used to make impressions for casting, and ones that used odd metal alloys that made them look silver colored. In my vain attempt to describe the varieties to a Western numismatic audience I collected quite a few of them. You can see some of my other examples here.