Home Coins of the Month May 2019 Spotlight 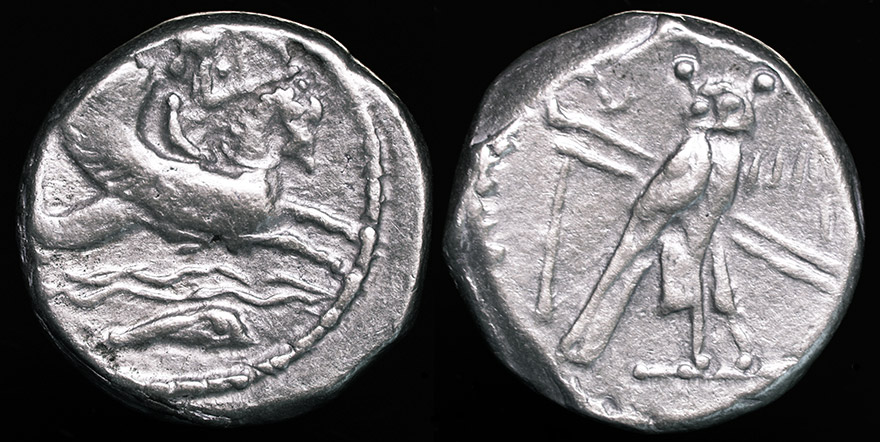 Phoenicia, Tyre AR Stater (Shekel). Circa 400-332 BC. Melkart, holding bow in extended left hand and reins in right, riding hippocamp to right; below, waves above dolphin swimming to right / Owl standing to right, head facing; crook and flail diagonally in background. Betlyon 37; SNG Cop. 301. Very Fine. and Scarce, and in nice condition for the type. Beautiful, lustrous metal. G. Markoe (Phoenicians, 2000) offers a succinct description of the early Tyrian coinage: “On its earliest issues, dateable c.450 BC, Tyre chose, for its obverse, a flying dolphin and a murex shell, both obvious references to the city’s maritime greatness (the latter was subsequently replaced by the figure of a marine deity riding on a hippocamp). Equally revealing is the motif chosen by the city as the reverse emblem: an owl with a crook and flail. These implements, venerable symbols of Egyptian royal power and authority, were closely associated with the falcon god Horus, a subject widely adopted in Phoenician art. The Tyrian diemaker, however, chose to replace the falcon with an owl, an image unattested to in the ancient Near East, but closely connected with the city of Athens. As the symbol of its tutelary goddess Athena, the owl appears prominently on the reverse of Athenian coinage, beginning in the late sixth century BC. Like its Athenian precursor, the Tyrian owl exhibits the same frontal head pose with staring eyes.” The adoption of the owl on the reverse of the coin attests to the importance of commercial relations between Tyre and its great Greek rival, Athens, on the one hand, and Egypt on the other. A similar influence is felt on early Palestinian coins, as strikingly shown by the coins of Gaza, which imitate not only the type and legend of the Athenian coinage, but are also struck on the Attic standard. Tyre too would eventually adopt the Attic standard shortly before the mid-fourth century.