Home Coins of the Month May 2018 Spotlight 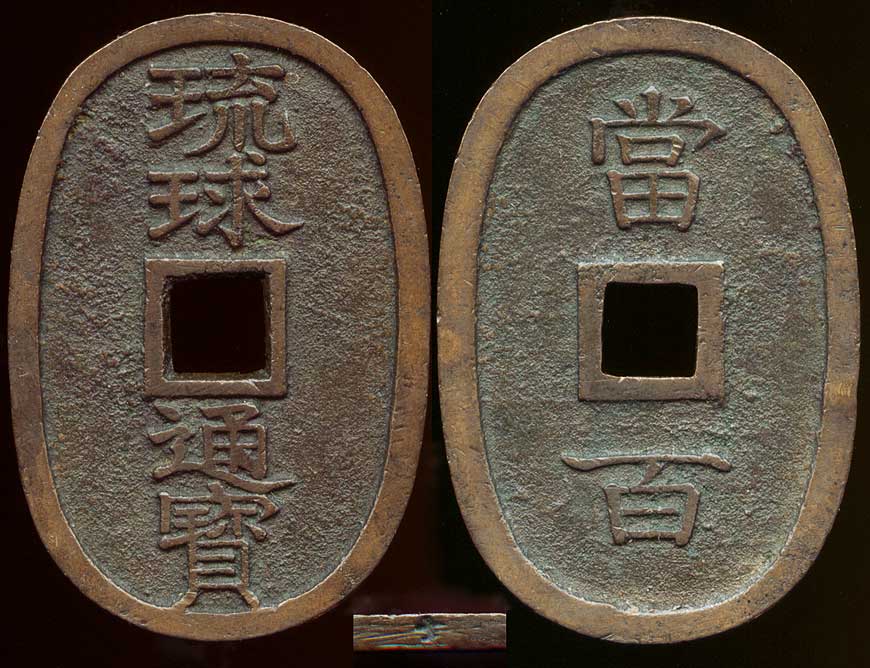 These coins were minted in Bunkyu 2-3 (1862-63) by the Shimazu clan at Isonohama, near Kashogima, the political center for Satsuma and also for the Ryukyu. Ryukyu traders and emissaries frequented the city, and a special Ryukyu embassy building was established there. The coins were originally intended for trade with the Ryukyu but apparently were little used there. It is said that their production was a smokescreen to hide the production of illegal Tempo Value 100 coins. Obverse: Ryu Kyu Tsu Ho (Ryukyu Currency); Rev: To Hyaku (Value 100). The edge here is stamped in two places with the first syllable of Satsuma ( ‘sa’ ). It’s nominal value of 100 mon soon declined to 88 mon. (ed. Hartill “Early Japanese Coins”) These issues are recognized as being part of an Asia wide inflationary period that began in China during the Tai Ping Rebellion. KM C#100, Hartill large character variety #6.28. The round Hanshuu Ryuukyuu Tsuuhou (half Shu; click link to see it) was ordered to circulate at the value of 248 mon, or twice the value of this 100 Mon coin. However it weighed merely 8 monme or about 10 to 12 times the weight of the average one mon coin. Han means “half” and “shu” is a gold currency weight. Therefore the Satsuma government was trying to command an exchange rate between copper currency and gold currency. Normally the relative exchange rates of silver, gold and copper currencies were unstable throughout Japan despite government attempts to decree them into one currency system. Thus although at one half shu this coin should have circulated at 32 coins per gold ryou (one koban coin), it is unlikely that it really did so. Info source: Nihon Ginkou Chousakyoku ed., Zuroku Nihon no kahei, vol. 4 (Tokyo: Touyou Keizai Shinpousha, 1973), pp. 319-322. From Luke Robert’s “East Asian Cash” website.