Home Coins of the Month May 2017 Spotlight 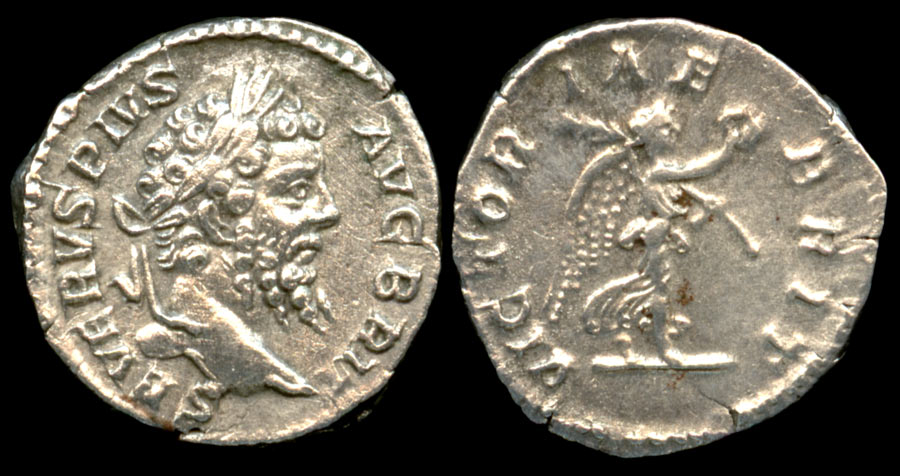 Roman Imperial silver denarius of Emperor Septimius Severus (Lucius Septimius Severus, ruled 193 – 211 A.D.). After the much heralded death of Emperor Commodus, and the short reign of Pertinax, Septimius Severus dispatched three other rivals in a Civil War (Didius Julianus, Pescennius Niger & Clodius Albinus) in order wear the laurel. He spent much of his reign campaigning in wars throughout far flung parts of the Empire and visiting the provinces. An invasion by northern Britons in 197 A.D. had resulted in much unrest in Britannia and Septimius decided to take advantage of this situation to employ his two rivaling sons and prepare them for their eventual rule. Septimius and his family arrived in Eburacum (modern York) in A.D. 209. The strains of the campaign, and his advanced age lead to his death there by natural causes (Feb. 211). His eldest son, “Caracalla” concluded a peace with the Caledonians in order to return the family to Rome for the funeral and consecration in the Mausoleum of Hadrian. Another accomplishment of their stay in Britannia was the renovation of Hadrian’s Wall. The scarcer obverse legend here (SEVERVS PIVS AVG. BRIT) reflects the Severan family’s stay in Britannia, as does the reverse theme. Here Victory advances right holding a palm branch and wreath; the legend is VICTORIAE BRIT. Sear 1692 (2nd ed., 1974), Cohen 727, RIC 332, BMC 51; 18mm & 2.91 grams. This coin appears in the NI Web site banner.