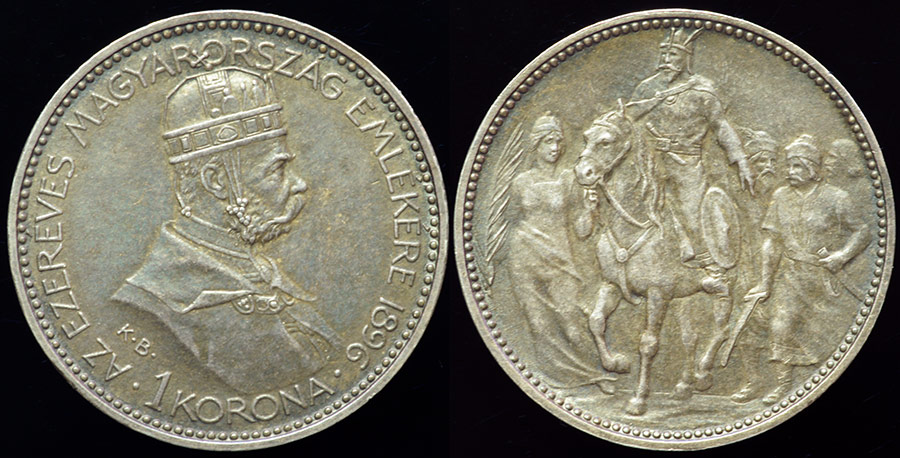 One Thousand Years of Hungary commemorative 1 Korona depicting Arpad on horseback leading his people into a new homeland, probably accompanied by his queen and son (s). Arpad (845 – 907 AD) was the head of the confederation of the Hungarian tribes at the turn of the 9th and 10th centuries. In a history involving the Byzantines and Bulgarians, the Bulgarians where attacking territories held by the Byzantines and they used the Hunnic tribal armies, led by Arpad, to push them back. In turn the Bulgarians hired the forces of the Pechenegs, a Turkic tribe, to unseat the forces of Arpad from their occupied territory. Thus, the Hungarians were forced to leave for a new homeland across the Carpathian Mountains towards the Pannonian Plain. While the medieval history is somewhat confused, Arpad, traditionally described as a descendant of Attila the Hun, led his people to this new homeland in 895 – 896 AD, and thus began a millennium of the Hungarian people celebrated on this Korona of 1896. This is an original strike and a one year type. This type has been re-struck several times in proof silver, with and without an edge inscription. While this is a common commemorative coin that is usually seen circulated, this specimen was obtained because it was still in a special cloth box of issue, labeled “Milleniumi Koronaerem 1896” on the lid. You can see a partial photo of this box of issue at this LINK. More than one version of this box has been noted, with another best described as a reddish brown fiber box.

The King depicted on the obverse is Franz Joseph I, wearing the famous Holy Crown of Hungary. This Byzantine made crown is still a Hungarian National Treasure and has been worn by all Hungarian monarchs since it was made in the 1070’s. The coins’ obverse inscription: ·AZ EZERÉVES MAGYARORSZÁG EMLÉKÉRE 1896 · 1 KORONA (meaning: “To the Memory of the Millennium of Hungary 1896 1 Crown) with K·B· under the King’s shoulder. The edge lettering reads: ~*~ BIZALMAM AZ ŐSI ERÉNYBEN (translation: “MY FAITH LIES IN ANCIENT VIRTUES”). The engraver was Filip Edmund Beck and the ‘K.B.’ is the mintmark for the Kremnitz mint, the coin has a medal alignment and only 1 million were struck.