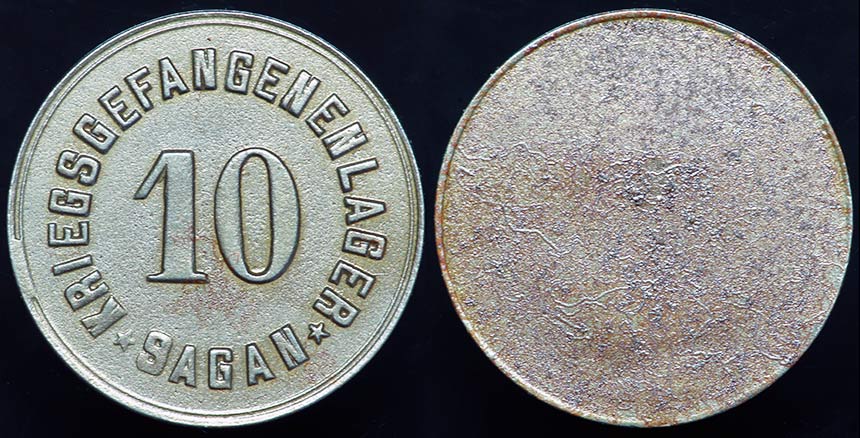 This unassuming uniface WWI P.O.W. camp token was an acquisition with two other Notgeld coins of Germany, only one of which I was interested in. That is until I looked into the attribution and history of this token and of the Camp at Sagan. Today the town of Zagan is a now part of Poland, before 1945 it was part of Germany (Silesia). This uniface coin, value 10, shows the legend "KREIGSGEFANENLAGER *SAGAN*" (literally: "war captured camp"), there was also a value 5 Pfennig token issued of the same style. Sagan again became the site of another German POW camp in WWII. It's claim to fame, other than it's cruelty to the prisoners, is the story of the "Great Escape." In March 1942, the town of Sagan became the location of the Stalag Luft III camp for captured airmen (Kriegsgefangenen Stammlager der Luftwaffe 3 Sagan). It was the site of the most courageous escape resulting in the execution of 50 prisoners. Under the leadership of Squadron Leader Roger Bushell (see Wikipedia) three tunnels with the names "Tom", "Dick" and "Harry" were dug by the prisoners (Mar. 1944). This episode of history was the subject of the 1963 film "The Great Escape," starring Steve McQueen and his Triumph T-6 motorcycle. In reality it was the biggest and the most deadly escape of pilots captured by Nazi Germany during the entire period of World War II. The number of prisoners attempting the escape was 200, of whom 76 managed to leave the camp; of those 73 were caught and 50 were executed on Hitler's orders. Just three successfully escaped, one to Gibraltar and two to Sweden. All three reunited in England eventually.