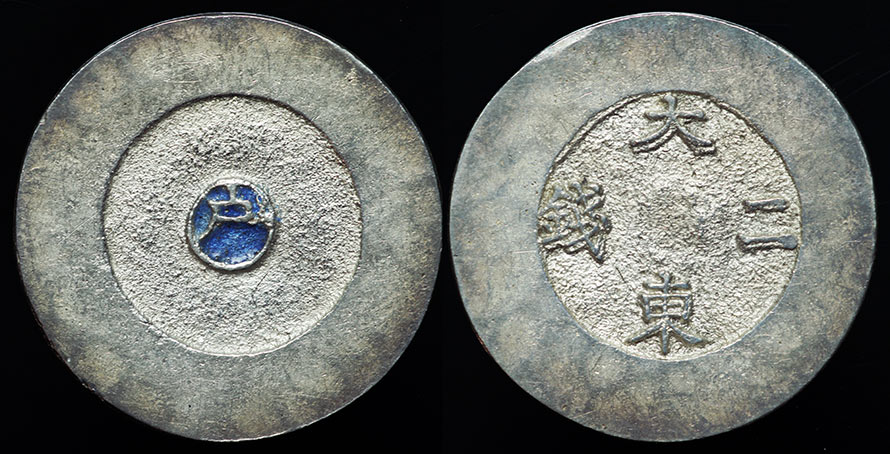 With the opening of the “Hermit Kingdom” to Western traders and religious evangelists, Korean officials attempted to modernize the traditional cash coinage in use for almost a thousand years. The Tae Dong Treasury Department, under the leadership of King Gojong, designed these unique cast silver coins to which they added a spot of colored enamel which necessitated an oven treatment to melt and solidify the ‘cloisonne’ enamel. Therefore, these coins may be the first ‘colorized’ coins ever to be manufactured. They were issued in three denominations, sizes, and colors. All denominations can be found in all three colors, making assembly of a super complete set a real challenge due to their scarcity. A slimmed set would consist of the three denominations in three different colors, or perhaps the three denominations in a single color. The three denominations are 1, 2, & 3 Chon and the enamel colors are Black, Blue, and Green, with their scarcities following in that order. These unique coins were manufactured for only a few months in 1882 – 1883. Silver prices were rising and the cost of manufacture was prohibitive. This resulted in these coins being hoarded by the ruling class and shipped overseas, mainly to Japan. The uncolored obverse is read from top, bottom, right then left. In this specimen we see Tae (Dae) Dong (t,b), which means “Great East” (Great Eastern Kingdom) and two (=) Chon. The reverse features the blue enameled center over the character “Ho” for Hojo (Treasury Department). This example (KM#1082) weights 6.8 grams and has a diameter of 27.5 mm. This one was encapsulated by PCGS as MS 61, which is a rather high grade for these types. I’ve managed to assemble the two slim sets that I’ve described; all denominations in high grade and all colors, and the three denominations all in the scarcest color of green. You can see these at the following LINK, (4 pages) were you can see and obtain more information on Korean coins.