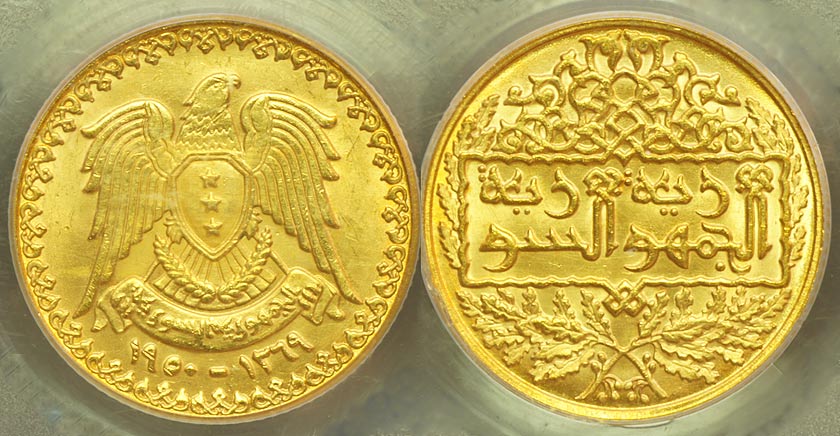 Following independence from the French and British mandate system at the close of World War II, politics in Syria became particularly chaotic. In May 1948 the president of Syria, in league with other Arab states, invaded Palestine to “destroy the Zionists” and prevent the formation of an Israeli state. With that failure came a succession of three military coups all within the space of one year in 1949. The last military leader, Colonel Adib Shishakli, lasted until another coup was successful against him in 1954. The Republic a Syria coinage began in 1948 and featured a new Coat of Arms consisting of the Hawk of Quraish (or Falcon of Qureish in the SCWC) and a banner stating “Republic of Syria.” This hawk or falcon originates in the Arabic tradition of falconry which used both types of birds of prey. Among the arabesques and oak leaves of the reverse is a cartouche also proclaiming the Republic. This .900 fine gold pound (6.7586 g; 20 mm; PCGS MS66) was only issued in 1950 with a mintage of 250k. A half pound was also issued with the same design but the mintage was only 100k. You can view a selection of other Syrian coinage, both before, during, and after the Republic of Syria at this link.