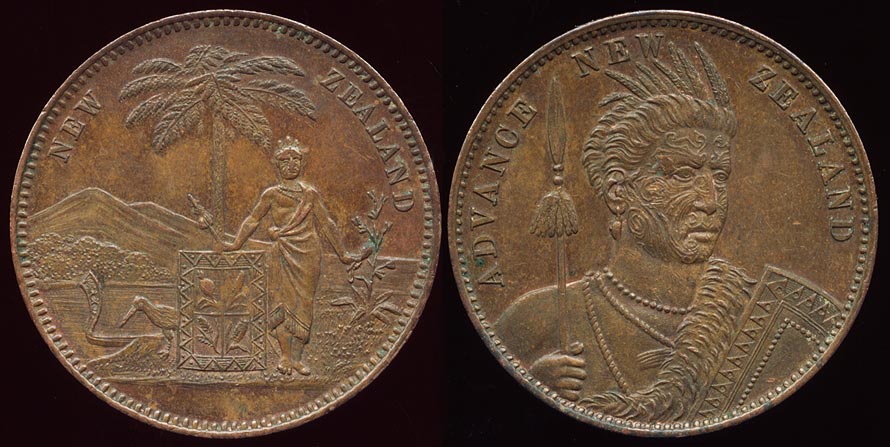 During the period of 1852 – 1856 New Zealand, a colony of Great Britain, was granted self-governance under a ministerial form of government. Consequently there was shortage of British money and merchants filled the gap with tradesmen’s tokens, some denominated, but most dependent on weight and size. Ten cities in New Zealand had merchants who issued 147 varieties of tokens in either copper or bronze. It wasn’t until 1897, when British coinage in copper and silver and Australian sovereigns became plentiful enough to displace the native tokens.

The example here is from Milner & Thompson. The company was in Christchurch and issued a number of designs, this one being the best. Other of their tokens state they were “Sole Agents for Brinsmead Pianos.” This One Penny Token was minted by Stokes & Martin, Melbourne, Australia. Issued by Milner & Thompson, Canterbury Music Depot, Christchurch, 1881. This music store was opened in 1874 by Robert Thompson, some time soon afterwards he took John Milner into partnership and they worked together for 21 years. When Milner retired Thompson continued in the business until he passed it to his sons in 1907. The business was bought by Charles Begg and Co. in 1920, and was still a going concern in 1950. Milner & Thompson were the last issuers of tokens in New Zealand (1881) and this example maybe the only type issued without reference to the business concern involved. It seems to have been issued to celebrate native culture.

Obverse: Maori warrior standing in front of a palm tree. He holds a large shield and spear with his right hand and a sprig in his left. The shield design is quartered with plants in each sector, a kiwi bird emerges walking left from behind the shield. In the sea behind the prow of a war canoe can be seen to the left of the kiwi and a mountainous island is seen in the background. Legend around, ‘NEW ZEALAND.’ Reverse: Bust a Maori warrior facing three-quarters right with tattooed face, wearing a feather headdress and holding a spear in his right hand and shield; legend around, ‘ADVANCE NEW ZEALAND.’ Krause Mishler SCWC KM#Tn 52.