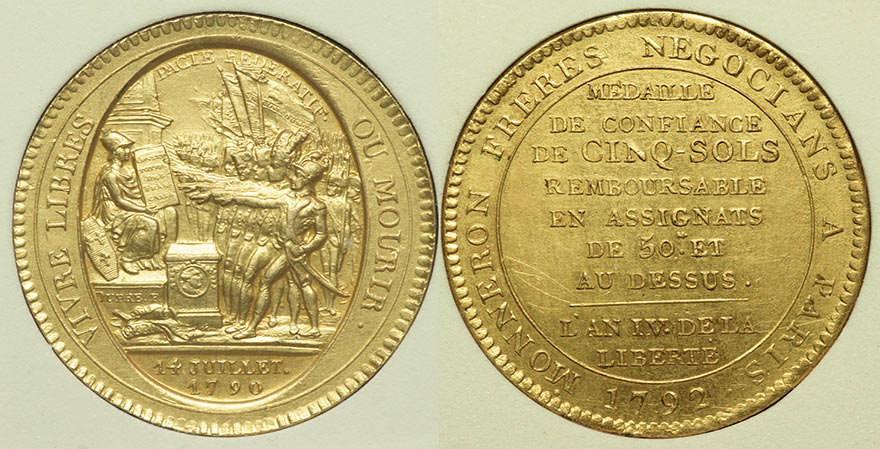 This gilded bronze Monneron token 5 Sols was minted in Birmingham England. Late in 1791 Matthew Boulton, utilizing his newly invented steam driven coin press, was commissioned by the Monneron Brothers of Paris France to produce 1, 2 and 5 Sols pieces in great quantity at his Soho Mint near Birmingham. These ‘monnaies de necessite’ were to be used to remedy the lack of small change which plagued France during the early revolutionary years. The technical and aesthetic quality of the tokens was far superior to the bronze coins of France at the time. Obverse – Soldiers swearing allegiance to personification of ‘France’, who holds a copy of the Constitution. Legend: “VIVRE LIBRES OU MOURIER.” (“Live Free or Die”). In exergue: “14 JUILLET 1790.” Above the flags: “PACTE FEDERATIF.” Reverse: “MEDAILLE DE CONFIANCE DE CINQ-SOLS REMBOURSABLE EN ASSIGNATS DE 50 L. ET AU DESSUS.” In exergue: “L’AN IV DE LA LIBERTE” Legend: “MONNERON FRERES NEGOCIANS A PARIS 1792.” Edge reads: “DEPARTEMENS DE PARIS . RHONE ET LOIRE . DU GARD . &c”. The date, L’AN IV de la Liberte refers to the Revolutionary French Constitutional Calendar and translates as 1792. The scene on the obverse shows the Oath of the Federation, the first anniversary of which was celebrated by the Festival of the Federation on 14 July 1790. The Festival, which included a mass held by the great French statesman Talleyrand (1754-1838), then the Bishop of Autun, also commemorated the taking of the Bastille and the bond uniting the nation, the king, and the people. In March 1792, the Monneron Brothers became bankrupt and one brother, Pierre, abandoned the business. Under the other brother, Augustin, the business recovered, but a law enacted 3rd May 1792 forbade the production of privately issued coinage. In September, a further decree also forbade the marketing of these ‘Medailles de Confiance’. This emergency coinage only remained in circulation until the end of 1793. These are listed in KM under France, Token issues of MONNAIES DE CONFIANCE (1791-92) KM Tn2 type (bronze); and under this gilt type by Mazard #146, Rarity 1.