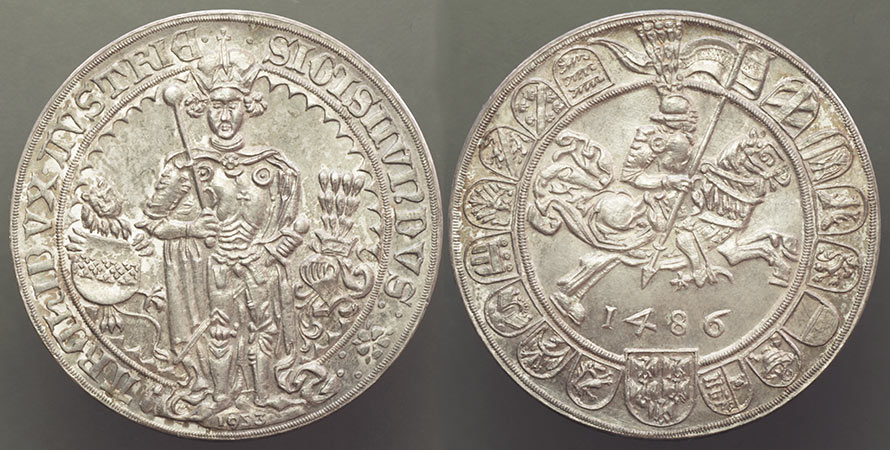 The Princely County of Tyrol, a state in Austria and previously incorporated into the Habsburg and Austro-Hungarian Empires, was famous for its abundance of silver in Medieval times. With its strategic position, including the Brenner Pass, this territory linked northern and southern Europe. The Romans used the area as a major trading and military movement route and built several famous roads into northern Europe from Italy. With the advent of new mining technology the ancient silver mines were reopened and began supplying large quantities of silver coin as the Renaissance era began. Sigismund (1427 – 1496), Archduke of Austria began striking large silver coins in 1484 with his 30 Kreuzer value Groschens but these were not the precursor sized coins that became known as Thalers. In 1486 he began producing 60 Kreuzer valued Guldiner [aka. Guldengroschen] coins that became known as Talers from his screw press mint in Hall, Austria. The Thalers, also spelled Talers, is a word derived from the German word for valley, or tal, and became the model for crown sized silver coins worldwide. The taler also became the root word for all world coins based on the denomination tolar, dalder, daler, and dollar, etc. The obverse presents an image of Sigismund with the legend “SIGSMVNDVS ARCHIDVX AVSTRIE,” here with the date 1953 below, the reverse shows a knight on horseback carrying a banner with the date 1486 below. The edge features the shield arms of 16 Austrian provinces around and the raised edge here reads: Tiroler Taler ~A900~ 1303-1953 ~ Hall Im Inntal~ (the date range here indicates that this restrike commemorates 650 Years of the City of Hall, Tyrol, Inntal is the Inn river valley).

You can view an original 1486 Taler at this LINK and then follow the progression of Austrian restrikes & commemoratives from this 1953 to 1986 (series), 2003, and a small screw-press product in silver that you can press yourself (now in copper), at the Hall Austria Mint Museum. In fact you watch a short video of the Hall Mint Museum at its Tower Mint location at this LINK.