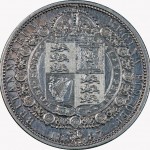 First issued in 1549 under King Edward VI, this Victorian issue has the classic Jubilee portrait with crowned head. Silver Halfcrowns were equivalent to two and one-half Shillings or an eighth of a pound. Only 1084 proofs were minted in celebration sets making this piece quite rare.

In Numismatics, what makes a coin valuable is not its age or of what it is made. If age was the determinant, then all Roman coins would be dear, when many Roman coins can be bought for $20 or less. It is the rarity of the coin that is the primary driver of value. This KM-764 coin is 92.5% silver, 32.13mm and weighs 14.138 grams.