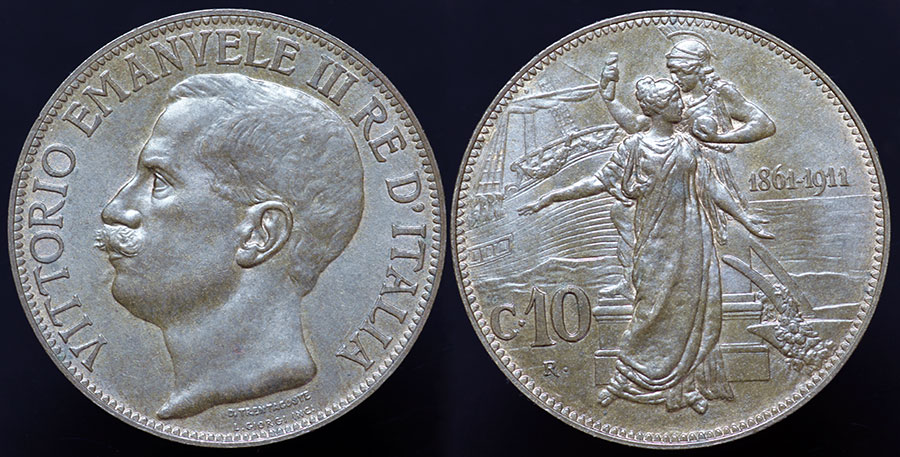 The 50th Anniversary of the Unification of Italy (“Cinquantenario” 1861 – 1911) fell during the reign of King Vittorio Emanuelle III. The Royal Mint of Rome celebrated with a particularly fine set of coins to commemorate the event. Beyond the typical kingly portrait by D. Trentacoste the reverse of this 10 Centesimi, and the other coins in this short series, were designed by the medalist Luigi Giorgi. The reverse design, done in neo-classical style, features two statuesque figures. The female represents a figure of ‘Italia,’ while the male figure behind, which may be an actual statue, is supposed to represent ‘Rome.’ To the right is a common theme of Italy, a plow, in this case draped with various agricultural produce. Behind, seemingly sailing into the scene, is a large wooden warship with is bow railing decoratively adorned. This design also appears on the 2 Lire silver coin in this commemorative series. For the very scarce 5 Lire silver piece and the scarce 50 Lire gold piece in the series, the ship sailing into the scene is replaced with a modern steam driven battleship, similarly adorned. Evaristo Luigi Giorgi, was a goldsmith, engraver, and medalist. He was the chief engraver of the Royal Mint in Rome and the first director-teacher of the School of Art of the Medal. Other coins by Giorgi are the rare pattern 1 dollar coin featuring Yuan Shi-Kai (“Fat Man Dollar”) of China, and other Chinese coins, and at least one coin of Italian Somaliland.