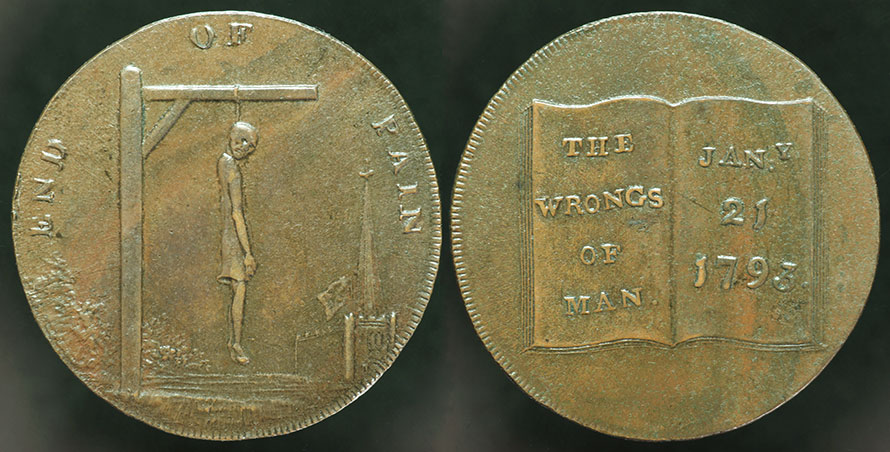 Political/Satirical Token “The End Of Pain”

This interesting Half-Penney Token is part of a sub-set of 18th Century tokens issued in Great Britain by private manufacturers. While many of these tokens were used by mining operations and manufacturers to pay workers, many others were issued as “store cards” for advertising purposes. Another group of these tokens were struck to present political messages, often in the form of satire. These are fascinating because a knowledge of the history of the times is required to understand the full propaganda incorporated in the design. “The End of Pain” token, shown here, is a very simple design that speaks to the wealth of history involving the age of revolution, both industrial and political. This token features Thomas Paine hanging from a gibbet with the British flag flying from the ramparts of a church in the background. The reverse shows an open book with “The Wrongs of Man” and the date: Jan’y 21, 1793. Thomas Paine came from England to the British Colonies of America where he was instrumental in coalescing opinion for an independence movement through the publication of “Common Sense.” When he returned to Britain he was forced to flee to France where he got involved in the French Revolution by publishing his liberal philosophy in the “The Rights of Man.” The date of January 21, 1793 is the date that King Louis XVI lost his head to revolutionary fervor. Therefore, this token contains a name pun on the obverse and a play on words on the reverse. Loyal Englishmen feared the type of liberal political philosophy that Paine espoused and fought against it using tokens like this one, and another known as A Map of France,” (click for link). While this strike is commonly attributed to Thomase Spence, an ally of Thomas Paine, it is not possible because the message on this token was against Paine. Another token, Pigs Meat” by Spence, shows this affinity and the common beliefs they held against the British Crown and the British Church.