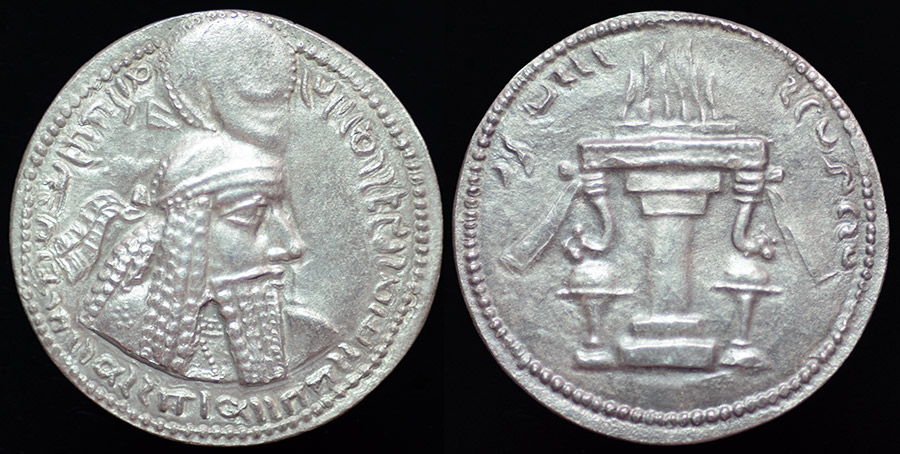 Ardashir I, the founder of the Sasanid Empire, did so by extinguishing the Parthian Empire (247 BC – 224 AD) which figured so prominently in Roman history. In doing so Ardashir established a new and larger module of silver coinage that lasted through the Arab-Sasanian coin transition to the Umayyad style coinage of Abd al-Malik Bin Marwan (685 -705 AD) where only Arabic writing is present due to the prohibition of human or animal images. In establishing a new coinage for his newly minted empire, Ardashir increased the size and weight of the drachm and also created a subsidiary silver coinage. He maintained a copper coinage that conformed more to the previous Parthian types but he also established a gold coinage that the Parthians never had and that were larger and heavier than the contemporary Roman gold aurei. Here Ardashir wears a koryimbus and the legend around states “The Mazda worshipper, the divine Ardashir, the king of kings of Iran” in Pahlavi. I have to admit that what drew me to this series, beyond the important history, is the reverse design. Here we see a Zoroastrian fire altar (without flanking attendants as found on subsequent rulers’ issues) and the legend “Fire of Ardashir” in Pahlavi script. The Fire Altar dominates the reverse of Sassanian coinage for the next 400 years, usually with flanking human attendants with the whole design becoming rather stylized in later years and copied in other nearby kingdoms. Zoroastrianism is a very important religion that is still practiced today and had a great influence on the development of early Christianity. AR Drachm (4.25 gms, 25 mm), Ctesiphon Mint (?), ca. 233-239 A.D.; Göbl type III/2/2. Sunrise 713 or 714.

In 230 AD, Ardashir I invaded the Roman province of Syria, and threatened Armenia and Cappadocia, forcing the young emperor, Severus Alexander, who earlier had tried to prevent war by diplomatic means, to fight. The two armies met in 232 AD, in a battle in which both sides sustained such heavy losses that each was compelled to withdraw. Although not a victory, the removal of the Roman forces allowed Ardashir to consolidate his new holdings in Armenia. Upon his death in 240 AD, Ardashir had established a new and significant threat in the Roman east.