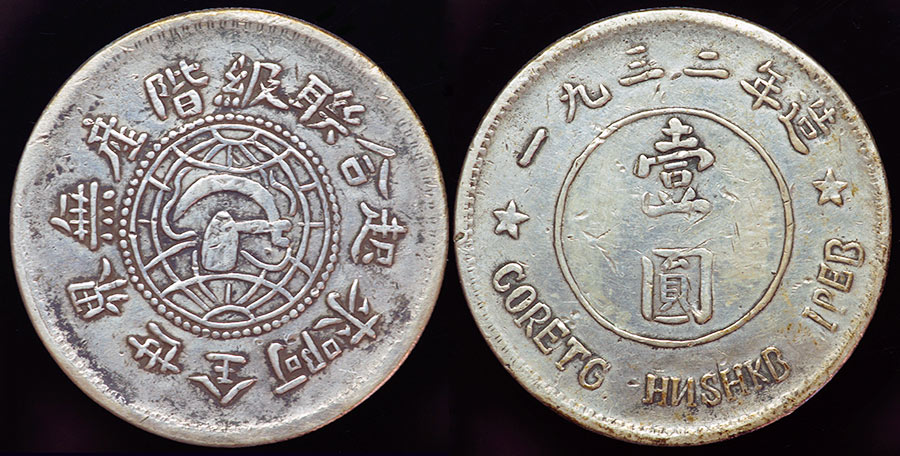 Normally seen as Hupeh-Honan-Anhwei Soviet, here is a bit of history about this important Communist Guerilla Base: O, or (Ngo) Yu & Wan are the respective literary names of Hupeh, Honan, Anhwei. This communist base, located between the borders of those 3 provinces, had been created between 1927 and 1929 by the consolidation of several smaller soviets. It was contemporary with the Chinese Soviet Republic. The army protecting the base was the original Fourth Red Army. In August 1932, under pressure from Chiang Kai-shek’s Fourth Annihilation Campaign, the O-Yu-Wan base was abandoned. It’s inhabitants began a smaller version of the Long March, and in Nov. 1932 reached northern Szechuan, where they established a new soviet base – the Szechuan-Shensi Soviet. They went on to coin the vast majority of Soviet issues.

The obverse depicts the classic hammer and sickle atop a globe with Chinese legend around reading, “ALL THE PROLETARIANS WORLDWIDE UNITE!” The central reverse displays “One Yuan” or “One Dollar” with Chinese legend above displaying the date of 1932. It is interesting to note the date is arranged in a western manner as 1932 which deviates from the traditional Chinese method of dating coins. The lower legend on the reverse is arranged in a “Pseudo Russian” script of somewhat debased Cyrillic, transcribed as “Soviet Chinese Republic”. Of the utmost rarity and importance as this ranks among the earlier of the Soviet issues, believed by many to have been struck for use in the Hupeh-Honan-Anhwei revolutionary base area. The only attempted bilingual coin of the Soviet series, although another coin from the Wan-Hsi-Pei Soviet has a denomination and date in shown in western fashion. KM# Y 503; L&M 887; Kann 802; 26.95 gm of about .900 silver. It has since been concluded that this example is a counterfeit, maybe contemporary with the period.