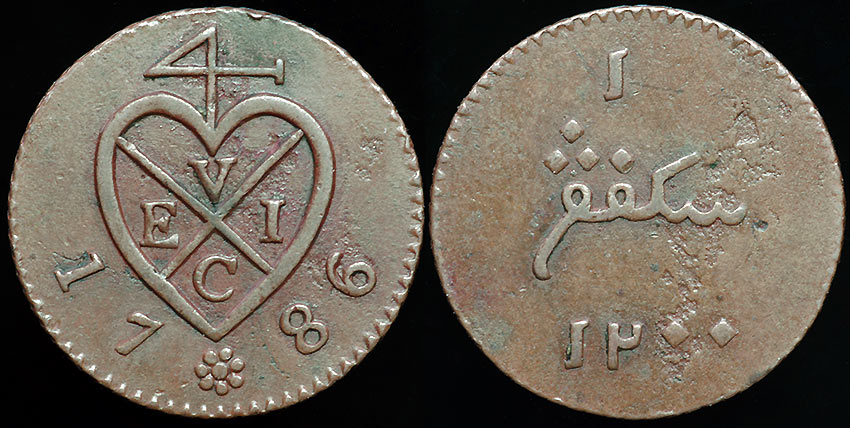 The famous Industrial Revolution coiner, Matthew Boulton, began his historic career as coiner with a contract with the British East India Company in 1786. The contract was to make coins for the Bencoolen (Bengkulu) trading port on the Island of Sumatra. Boulton’s true interest was to strike small change coins for the British government, the responsibility for which had been taken over by private concerns, due to official inaction. He finally managed to gain official sanction to mint the 1 and 2 Pence “Cartwheels” in 1797. In the mean time Boulton developed the first steam driven coin presses that were fully automated, to include collared dies and automated coin ejection technology. Famously, he combined his quest for steam driven industrialization, with the aid of James Watt, and others, to help accomplish the birth of the Industrial Revolution. However, these early E. India Co. coins were made using a manual screw press. The copper blanks were made at Boulton’s Soho mint where the copper was rolled on water wheel powered equipment. They qualify as an early industrial effort by Boulton and Watt, because, due to the the lack of a sufficient water flow at the mill, a steam engine was employed to circulate the water back to the top of the water wheel. Therefore, steam power was used to help make these earliest of industrial era coins.

The coin bears the VEIC (United E. India Co.) bale-mark and the first year of issue, 1786, on the obverse. The reverse bears the the denomination of 1 Keping in Jawi script and the A.H. date of 1200. The edges have either an oblique or vertical engrailing that helped to prevent counterfeiting and shaving of the copper. Proofs, including gilded examples, also exist as well as 2 & 3 Keping denominations.