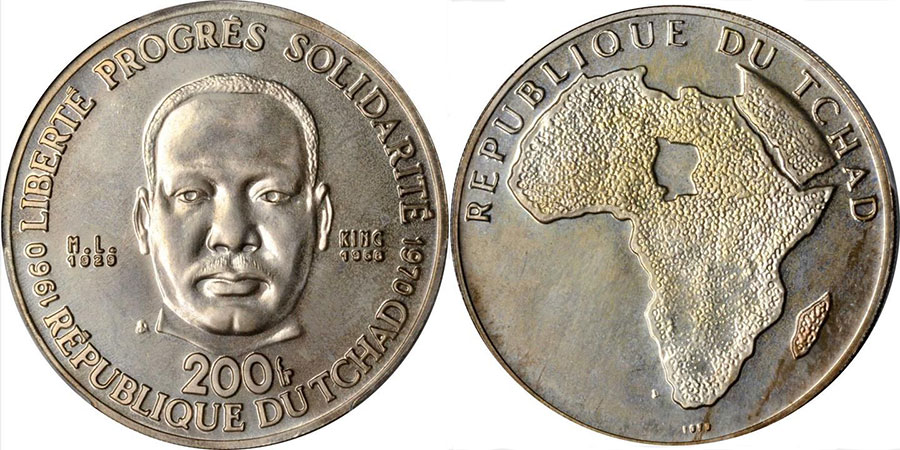 The Republic of Chad, a landlocked country in North Africa straddling the Sahara desert and more vegetated areas to the south, is historically linked to various other political and monetary unions. These are the French Equatorial Africa, Equatorial African States and the Central African States. After gaining independence from France in 1960 Chad observed the 10th Anniversary of this independence with a five coin proof set dated 1970. They chose to honor John F. Kennedy, Robert Kennedy, Martin Luther King (all three Americans assassinated), Charles de Gaulle, and Abdel Nasser. My interest was in the JFK coin, with 504 struck, was that it incorporated a depiction of an Apollo spacecraft which I needed to complete my set of coins honoring that famous moon landing space program. All of the coins have a mintage under 1000 but some are under 500, all in proof and most as part of a proof set. Again, in light of recent events I chose Dr. Martin Luther King Jr. to present here (KM#4). Assuming KM’s SCWC is correct, 954 MLK 200 Franc coins were struck at the Brussels mint. This coin portrait of the famous civil rights leader is probably the best of any coin depicting his image, and certainly the lowest mintage. It’s minted in 15 g. of Sterling silver.