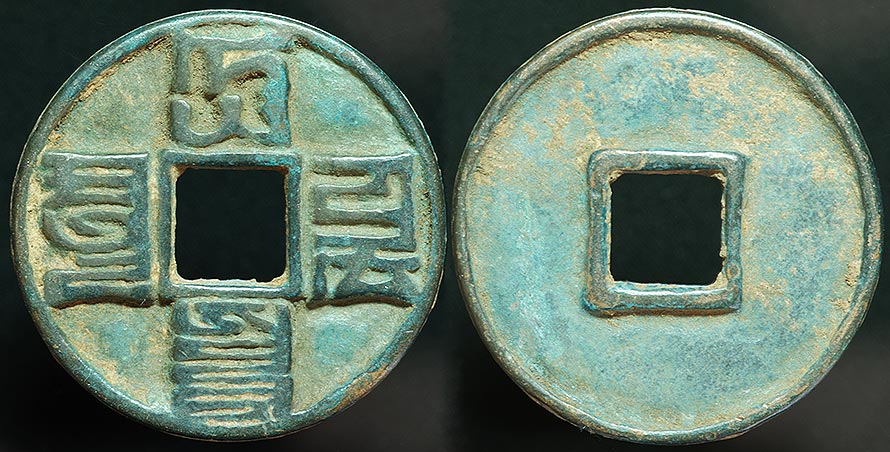 After nearly forty years of fighting a branch of the Mongol Empire, known as the Yuan, established themselves as rulers of all of China. The Yuan Empire was preceded by the Song Dynasty and followed by the Ming Dynasty, both powerful expressions of Chinese culture. With the victory by the Mongols Khubilai Khan (Shi Zu) became the Emperor of China in 1280 A.D. and established his capital in Peking. One of Khubilai’s main contributions in the history of money was the broad use of mulberry paper currency as certificates for silver yuanbao, the boat shaped ingots used for larger transactions. They carefully regulated the issue of this paper money to reflect the actual amount of precious metal held in reserves, kind of like having your cake and eating it too. Another innovation by the Great Khan was to employ a Tibetan Lama to invent a new Mongolian alphabet (Phags-pa) to help unify his vast multilingual empire.

Wu Zong, the issuer of this coin, a 10 Cash piece of 1310 A.D., was the second Emperor following Khubilai Khan. To mint an abundance of these 10 Cash pieces a separate mint was established. In general, Yuan Dynasty coins are rather scarce, but this narrow rim (Hartill 19.46, F. Ding 1733, Schjoth 1099) coin is obtainable, well cast and handsome. The Phags-pa script, like most common Chinese coins is read from top to bottom, then right to left. Here the characters are: “Da Yuan Tong Bao” (in Chinese) and means: “Coin of Great Yuan” (Mongol). Since hoarding had become a big problem for the Yuan, soon after the issue of this coin a decree was issued abolishing the use of all former copper coin and establishing a new, much smaller sized, copper cash coinage. This inflationary 10 Cash of 1310 A.D. weighs 24 grams with a diameter of ~40 mm.