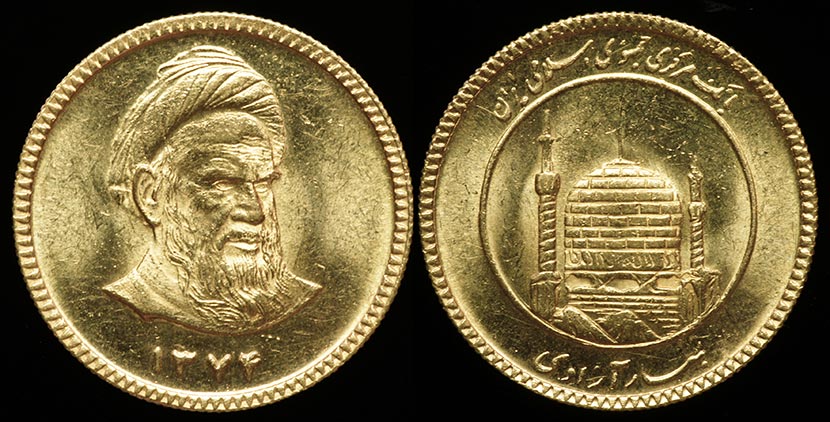 Islamic Republic bullion coinage issued by the National Bank of Iran. Obverse features a mosque with the legends “The Central Bank of the Islamic Republic of Iran” and (perhaps) “Spring of Freedom”. Reverse features a facing 3/4 portrait of Khomeini. Another type celebrating him shows a left facing portrait. Ruhollah Mostafavi Moosavi Khomeini, (24 September 1902 – 3 June 1989), was an Iranian religious leader and politician, and leader of the 1979 Iranian Revolution which saw the overthrow of Mohammad Reza Pahlavi, the Shah of Iran. Following the revolution, Khomeini became the country’s Supreme Leader, a position created in the constitution as the highest ranking political and religious authority of the nation, which he held until his death. After coming to power, Khomeini ordered the destruction of Reza Shah’s mausoleum, and executed opposition members by the tens of thousands. Khomeini’s killing spree included 1,988 executions of Iranian political prisoners, among many others. Khomeini used religion to gain and justify his political power. Khomeinis’ close circle created a myth around him and elevated him to god-like status. (Wikipedia) The mosque depicted is probably the Imam Ridha Mosque in NE Iran, at Mashdad. It entombs the remains of the eighth, “Twelver” Shiah Imam, ‘Ali al-Ridha’. The mosque-complex is the largest mosque in the world. This gold bullion Azadi coinage is dated SH1374 (1995), weighs 8.136 g,; .2354 oz AGW and .900 purity.