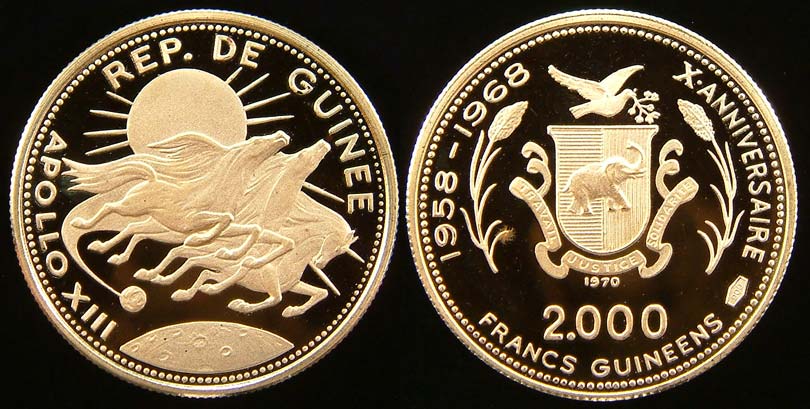 This month’s coin celebrates Peru, the important history of Túpac Amaru II, and an award winning article by Alan Luedeking found in a previous issue of NI’s “Bulletin.”

One of the first countries to commemorate America’s 1969 Moon Landing (Apollo XI) Guinea repeated the honor a year later for Apollo XIII’s near fatal disaster and miraculous recovery. Guinea also struck another 2000 Francs gold coin, stuck in 1970, for the USSR’s Soyuz spacecraft. This series also commemorated the 10th Year of Independence from France. The obverse image of this coin is included on the NI Web site banner and concludes the exposition of coins on the banner.

In 1958 the French Forth Republic collapsed due to political instability and its failures in dealing with its colonies, especially Indochina and Algeria. The founding of a Fifth Republic was supported by the French people, while French President Charles de Gaulle made it clear on 8 August 1958 that France’s colonies were to be given a stark choice between more autonomy in a new French Community and immediate independence in a referendum to be held on 28 September 1958. The other colonies chose the former but Guinea, under the leadership of Ahmed Sékou Touré, voted overwhelmingly for independence. The French withdrew quickly, and on 2 October 1958, Guinea proclaimed itself a sovereign and independent republic, with Sékou Touré as president.