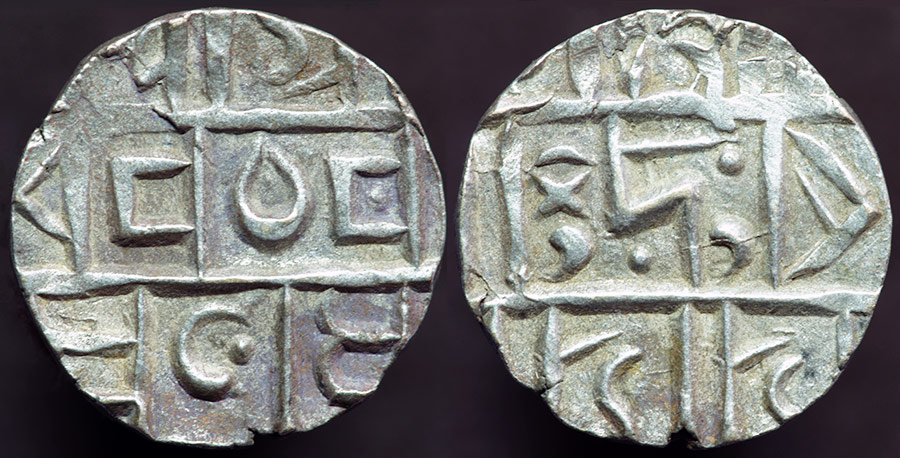 The tiny Himalayan kingdom of Bhutan has been called the “Dragon Kingdom”. It was established as a priestly monarchy in 1652. For many years it used coins from the nearby Indian state of Cooch Behar. It started to strike its own coins about 1790, after the British East India Company closed the Cooch Behar mint. The undated coins, denominated as Deb (1/2) Rupees, were originally good silver; however by about 1840 the coins became heavily alloyed with lead and then copper. The copper Deb Rupees continued to be struck until about 1910. The Deb Rupee was the only denomination struck by Bhutan until the 20th century with the rare exception of a full Rupee KM# A[&B] 23. Though the basic design remained unchanged, there are numerous varieties, making for a fascinating and challenging collecting area.

This First Period type listed in KM as 1.1, (1700’s). I’m not sure if this is officially a separate variety but I’ve seen this type described as an ‘extra dot’ variety. This exceptional example is a good solid silver example from the 1st Period of coinage. The first period (1790 – 1840 A.D.) includes coins struck on a Cooch Behar (India) model. This is KM# 1.1 with the ‘ball’ symbol incorporated into the design. It’s about 20 mm in diameter and weighs 4.55 grams. If you’d like to delve more into the fascinating numismatic field of Bhutan and Cooch Behar follow this LINK where you can see a scarcer copper 1/2 Rupee with swastika incorporated into the design. There you’ll also find two viewable and downloadable articles on the subject. The model for the Bhutan types of coinage can be seen at this LINK.