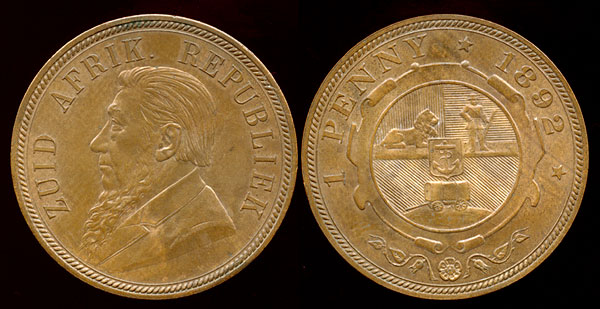 Dutch, German, and French Huguenots established themselves in southern Africa in the 17th and 18th Centuries and became known as Afrikaaners. By 1814 Great Britain had established dominance and permanent claim to the vast region. The Afrikaaner farmers began to move north in order to escape the British dominance and eventually established two independent Boer Republics known as the Transvaal and the Orange Free State. With the discovery of diamonds and gold the British moved on these areas too. The resulting Boer Wars of 1880 – 1881 and again in 1899 to 1902 resulted in the incorporation of the Boer areas into the Union of South Africa. The 1892 bronze Penny of the Zuid Afrikannsche Republiek (ZAR, 1874 – 1902) is the first year of issue for the ZAR during their continued independence after the First Boer War. The obverse features a portrait of Paul Kruger who later appears on the famous Krugerrand gold bullion issues. This KM#2 of 1892 had a mintage of 83,000 pieces. Obverse and reverse images of this coin appear in the NI Web site banner.