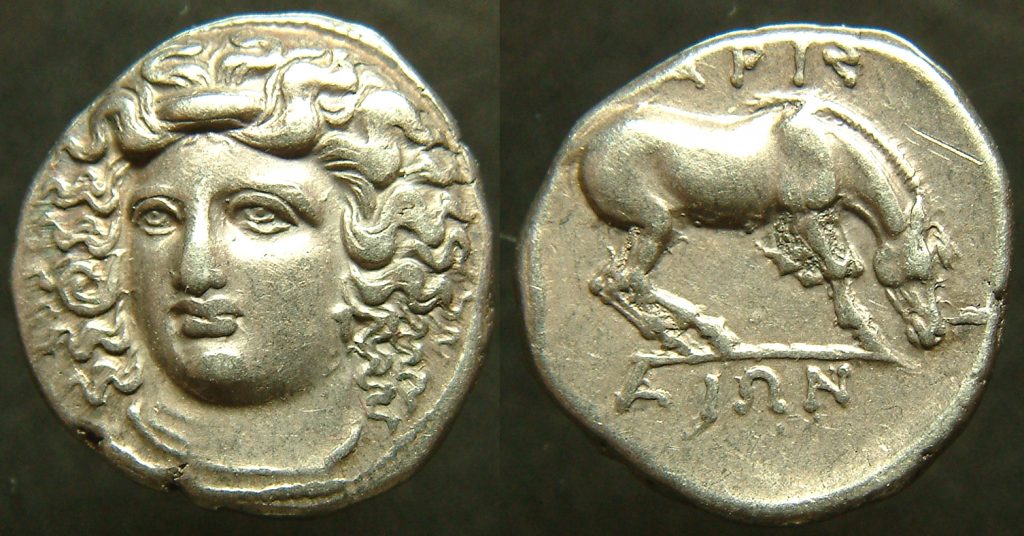 Larissa and her nymph

Larissa was the most important town of all the federated towns of the Thessalian plains; they were famous for their cattle and horses. Larissa (the town) is named after the daughter of Pelasgos and was situated on the river Peneios. This stunningly beautiful coin depicts the nymph Larissa 3/4 facing to left, wearing necklace; hair is confined by fillet and floating loosely, with ampyx in front. The reverse features a horse that is usually described as ‘grazing’ but everyone familiar with horses knows that this particular position, head down with the legs as shown, indicates a horse that is about to go down and roll over. These gorgeous coins are part of the attractive Greek series of ‘facing’ female portraits. There are several die varieties, some where you might say she’s ugly. As with all facing coins, the nose takes a a beating so finding a nice looking Larissa without a flattened nose is a bit more difficult. This one is modeled after the very famous issues of Syracuse featuring the facing head of Arethusa by Cimon. The obverse image of this coin is included on the NI Web site banner. c. 350 B.C.; AR Drachm at 6.05 gm; ~ 19 mm.