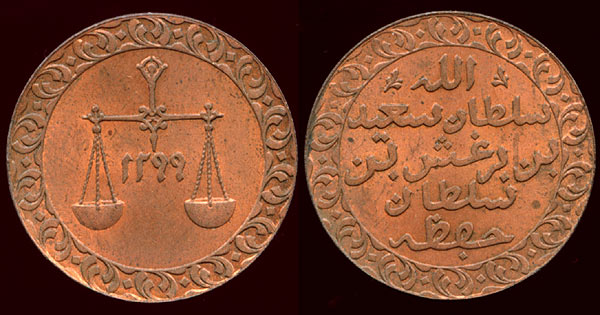 Zanzibar was a British Protectorate on islands in the Indian Ocean off the coast of Tanzania (Tanganyika). It comprised a portion of British East Africa and were otherwise known as the Spice Islands. You’ve got to love the double pan balance scales (with date between) as a symbol of extensive trade in the area. The AH 1299 (1882) 1 Pysa is commons, but the AH 1304 (1887) coin is very scarce. The AH 1299 coin was struck at the Royal Belgian Mint, Brussels, Belgium while the AH 1304 coin was struck at Heaton’s Mint, Birmingham, England and have a completely different script obverse. These coins were commissioned by Sultan Barghash bin Said ibn Sultan who was, apparently and understandably, upset that his name was written incorrectly on the coins as “Sultan Said ibn Barghash ibn Sultan.” Bargash was the son of Said and not vice-versa. It is accompanied by the expression “حفظه الله”, “may Allah save him.” Note that even one of the Arabic characters was incorrectly written: the “fa” in “حفظه” is written with a dot below (a Maghreb variant) rather than with the dot above as in standard Arabic script. This mistake is unique among coins of comparatively modern times (Freeman Grenville). The obverse image of this coin is included on the NI Web site banner.