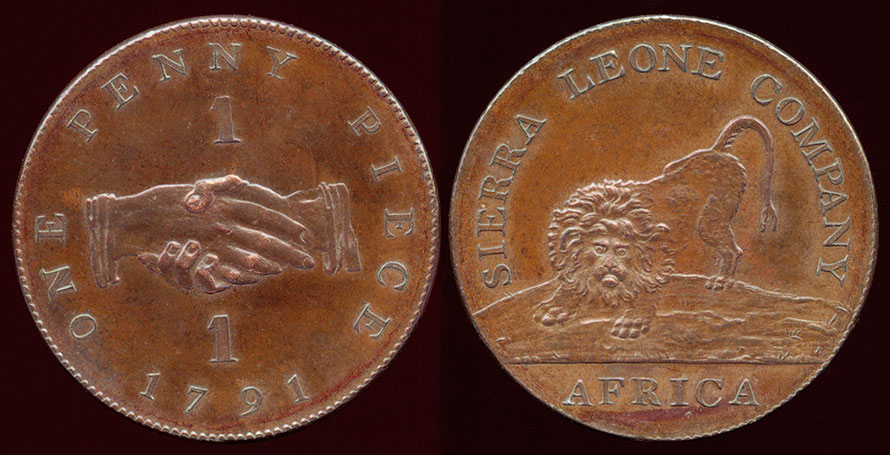 In 1787 the British established the “Province of Freedom” in an area of the west coast of Africa that the Portuguese and Spanish had named Sierra Leone (Lioness Mountains). The original intent was to repatriate the poor blacks of London. Following the American Revolution the British had moved Loyalist blacks to Nova Scotia where they experienced a cool welcome and an even colder climate. Consequently, the first group of 400 blacks, 60 whites, and some West Indians were sent to Sierra Leone in May of 1787. Eventually many thousands were transported there and the towns of Granville and Freetown were established. Thirty years later abolitionists and influential members of the United States government established a similar colony south of Sierra Leone known as Liberia.

While the earliest coins manufactured for the new colony of Sierra Leone are dated 1791 this date merely represents the date of the founding of the Sierra Leone Company. The earliest coins were not ordered from the Matthew Boulton company in Soho (Birmingham) until August 1792 and none were minted until December of that year. The Penny shown was part of the first issues along with the silver dollar. Later issues had the basic penny denomination changed to cent and this became the first decimal monetary system of 100 cents equalling one dollar. The Standard Catalog of World Coins has the coin here, and all the of the Penny and Cents as struck in bronze. This is incorrect, all of these were struck in copper but some, like this proof example, were bronzed and in some cases gilt covered. This coin is cataloged as KM 2.1a, you can see the second issue denominated as a Cent at this link.